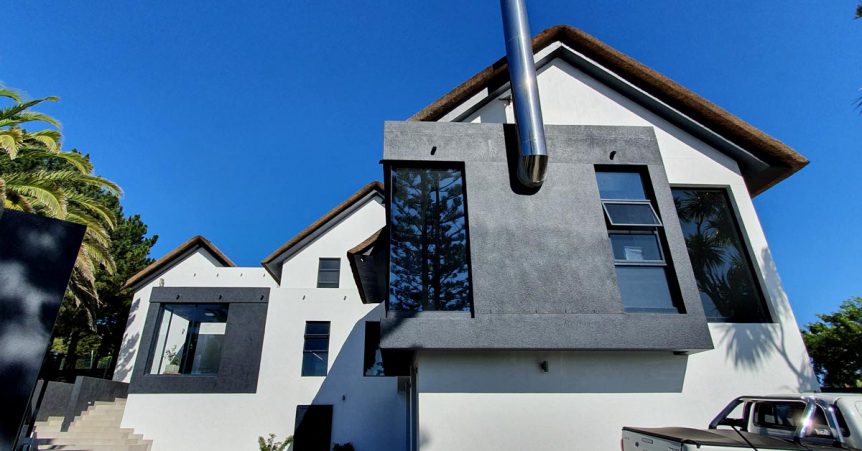 For the longest time Louis had the dream to remodel his private residence in Cape Town. Originally built in the more traditional Cape Dutch building style, Louis envisioned a modern thatched roof villa to reflect the clean lines of a contemporary design concept.

The project kicked off in September 2018 and was completed little more than 18 months later. This saw a big percentage of the original structure demolished, leaving some structural elements in place to form part of the new building.

Several months of construction slowly saw the project take form. A well-balanced blend of concrete walls, clear treated timber members and cape reed thatch roof resulted in a contemporary villa with magnificent views of the beautiful surroundings. A total 25.8m³ of Eucalyptus Cladocalyx timber was used to structurally support the 397m² thatched roof, equating to a whopping 28tonnes of timber and 23,820 bundles of cape reed thatch!

Leading up from the driveway and double garage, the foyer splits into a family entertainment room with patio on the right and a sitting room to the left. The latter flows into an open-plan kitchen with adjacent scullery as well as the en-suite master bedroom/bathroom with access to the garden patio.

A curved concrete and glass stairway make the way up to the first-floor landing which leads into two bedrooms with en-suite bathrooms.

The project also included the construction of a fully serviced staff accommodation, complete with two bedrooms, bathroom, living area and courtyard as well as an office block that now house the Cape Reed Products office.

Fittingly, a beautiful thatched roof forms the crown of this ultra-modern residence, paying the ultimate tribute to a great man, leader and visionary.