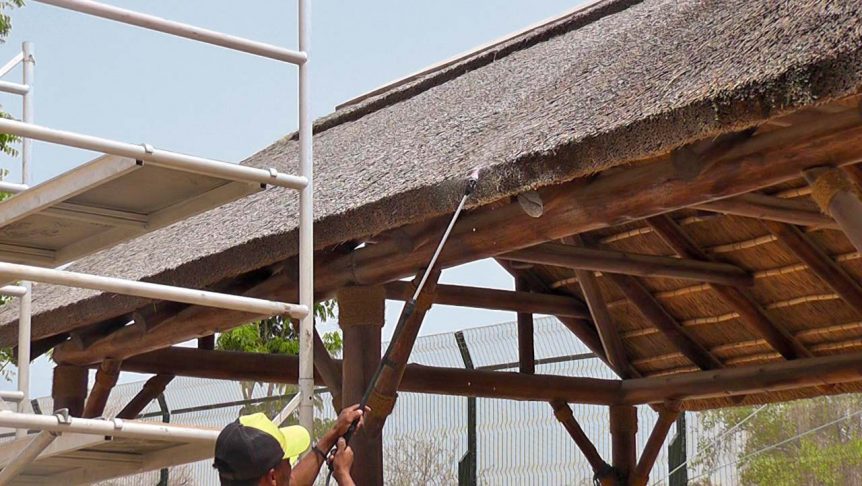 Through the ages the risk of fire has been the number one negative aspect of a thatched roof. Many a thatched roof have been destroyed by this fearsome element and even today it is a question that is frequently asked: isn’t a thatched roof a huge fire risk?

Many will be surprised by the answer – a thatched roof doesn’t really have a higher fire risk than any other roof type. It all depends on whether proper precautions have been taken during the construction process.

Cape Reed is extra vigilant when it comes to the safety of their structures, especially when it comes to fire protection. That is why they incorporate a number of methods to ensure the fire retardance of their thatched roofs.

It starts off with the specific thatch that’s being used to create these beautiful roofs. The natural fire rating (resistance to fire) of cape reed thatch (thamnochortus insignis) is much higher than any other competitive product because of an exceptionally high density and a natural protective silicon like layer in which the reeds are covered.

This natural fire rating is increased through advanced technology in the construction process by which a fire retardant cloth (FireBloc), capable of resisting temperatures of up to 500°C, is continually woven through the thatch. The fire rating can be even further enhanced by the application of an internationally approved chemical (Cape Reed FireShield) that is sprayed onto both external and internal surfaces.

These measures taken by Cape Reed greatly reduce the risk of fire and has been confirmed as effective by independent testing.